TransMag
Inicio Don´t Trust Anyone Over Thirty: Entertainment by Dan Graham and Friends

Don´t Trust Anyone Over Thirty: Entertainment by Dan Graham and Friends

TRANS> is pleased to present the premiere of the puppet rock opera, Don’t Trust Anyone Over Thirty: Entertainment by Dan Graham and Friends, at Art Basel Miami Beach December 1-5, 2004.  Incorporating live music, video, and marionettes, the show portrays the absurdity of the hippie obsession with youth culture by following the ascent of Neil Sky, a 24 year old rock star turned President, who changes the voting age to 14 and retires the “over thirties.”

Conceived of by the renowned conceptual artist Dan Graham, Don’t Trust Anyone Over Thirty is a collaboration with contributions by other influential conceptual artists including, Tony Oursler, Rodney Graham and Paul McCarthy. Philip Huber, the master puppeteer responsible for the marionettes in Being John Malkovich, designed and built the puppets; his team of puppeteers will manipulate them during the performance.  After its premiere in Miami, Don’t Trust Anyone Over Thirty will travel to New York, Vienna, and London.

TRANS> is a not-for-profit arts and culture organization devoted to supporting innovative contemporary artists. Based in New York City, TRANS> has a publishing division, an exhibition space in Chelsea, and curates exhibitions in public spaces throughout the world. In each of its departments TRANS> brings cutting edge art and cultural productions to the international public.

TRANS> was founded in 1995, the year that the first issue of its publication, TRANS>arts.cultures.media debuted. Artists such as Gabriel Orozco, Olafur Eliasson, and Arturo Herrera have done projects for the pages of TRANS>arts.cultures.media, and the journal is now on its eleventh issue. In 2002, after the success of the publication, TRANS> founded its exhibition space.  Since its inception, the gallery has given first solo exhibitions in New York City to emerging artists, many of whom have gone on to be well recognized, including Anri Sala, Koo Jeong-a, Yang Fudong, and Daniel Guzman.  In addition to hosting the innovative shows in its gallery space in New York, TRANS> also curates offsite projects.  In 2002, TRANS> commissioned the critically acclaimed, A Smile Without a Cat, a fireworks piece by Pierre Huyghe and Phippe Parreno that debuted on the inaugural night of Art Basel Miami 2002.   A Smile Without a Cat is one of many offsite projects TRANS> has produced, others include Utopia Shelters and En el Cielo.

Foundation 20 21, co-producer of Don’t Trust Anyone Over Thirty, is a New York based arts organization and collecting entity with a mission to nourish exchanges among artists, writers, filmmakers, historians and philosophers as well as to present to a wider audience some of the most arresting work being produced in our increasingly complex visual culture. While assembling a collection with an aim to build bridges between key developments in 20th and 21st Century art, Foundation 20 21 mounts occasional exhibitions of overlooked or forgotten work from the past in order to bring to light its relevance to our times. Shows of recent acquisitions, unusual publishing projects, artist presentations, lectures, film and video screenings are also part of the program.

Founded by Tim Nye and Miguel Abreu as an outgrowth of Thread Waxing Space, the Soho art center which closed its doors in the Summer of 2001 after a ten year run, Foundation 20 21 focuses on creating a congenial environment for the presentation of art and the debate of ideas. With an intimate exhibition space located in the National Arts Club, at 15 Gramercy Park South, New York, Foundation 20 21 was conceived to become a flexible cultural enterprise capable of quick responses and dedicated to the re-enchantment of art and the nurturing of vision.

The Thyssen-Bornemisza Art Contemporary foundation, co-producer of Don’t Trust Anyone Over Thirty, was founded under the leadership of Francesca von Habsburg, and continues the 4th generation of the Thyssen family’s passion of supporting the arts.

T-B A21 promotes and supports contemporary artistic creation by collecting important and challenging works of art from established and emerging artists,

Other T-B A21 projects for this year also include the loan of artworks and co-curation of the exhibition Einleuchten – (opening exhibition in July of the Museum der Moderne Salzburg) as well as major collaborations with artists Julian Rosefeldt, Kutlug Ataman, Darren Almond, Olafur Eliasson, Janet Cardiff, Candice Breitz and Olaf Nicolai.

DAN GRAHAM is an early and innovative conceptual artist whose work has been exhibited in most important art institutions world-wide.  As a theoretician and writer he has broken significant ground by considering rock music via the disciplines of art-criticism and cultural theory. In 1992, he published Rock My Religion a book of essays edited by Bruce Wallis dealing with these themes.  He has won numerous awards including The French Vermeil Award (2001), The Skowhegan Medal for Mixed Media (1992), and the Coutts Contemporary Art Foundation Award (1992).  His work is included in important collections domestically and abroad, and he has had recent solo shows at Contemporary Art Gallery, Vancouver, Canada (2003), Chiba City Museum of Art, Chiba, Japan (2003), Kitayushu Municipal Museum of Art, Fukuoka, Japan (2003), Marian Goodman Gallery, New York (2002), and Museo Serralves, Porto, Portugal (2001).

His work has also been presented in notable group shows at the Los Angeles County Museum of Art, Los Angeles (2004), Fundacio Joan Miro, Barcelona, Spain (2004), and the Venice Biennial, Italy (2003-2004), among others.

Dan Graham was born in Urbana, Illinois in 1942, and lives and works in New York.  He is represented by Marian Goodman Gallery in New York and Paris.

PHILIP HUBER AND HUBER MARIONETTES, master puppeteer for Don’t Trust Anyone Over Thirty, is an internationally recognized “artist with marionettes”, and is most widely known for his screen work as the marionette-manipulating hands of John Cusack in the 3-time Academy Award nominated film Being John Malkovich. Phillip’s stage credits include Busker Alley starring Tommy Tune, It’s Magic starring Harry Anderson, That’s Christmas starring Sandy Duncan, Christmas with Friends and Nabors starring Jim Nabors, and The Road to Hollywood with Tony Award-winning director Walter Bobby. Television appearances include The Tonight Show with Jay Leno, LePlus Grande Cabaret du Monde for French TV, Showbiz Today for CNN and numerous commercials, the most recent being Move Free for Weider Nutrition. Phillip’s nightclub performances include the Lido in Paris, Casino de Monte Carlo in Monaco (also a Royal Command Performance for Prince Rainier), The Magic Castle in Hollywood, Rainbow & Stars in New York, as well as on first-class cruise ships around the world.

TONY OURSLER was born in New York City in 1957.  He graduated from the California Institute for the Arts with a BFA in 1979 and returned to New York where he has continued to live and work.  Oursler has specialized in installation, painting, sculpture, and video since the mid-1970s. His recent mixed media installations, in which theatrical objects such as puppets and dolls are layered with video projections and spoken text, are prefigured in the wildly inventive body of videotapes that he has produced over the past twenty years.  Like Graham,Oursler’s work has also considered the role of music in society; he has done projects with Sonic Youth as well as other music icons. His recent solo exhibitions have included, Gallery Paule Anglim, San Francisco (2003), Lisson Gallery, London, England (2003), Parallel Lines Studio d’Arte Raffaelli, Trento, Italy (2002), Magasin 3, Stolkholm Kunsthall, Sweden (2002), Tony Oursler Drawings, Lehmann Maupin, New York (2001), Metro Pictures, New York (2001), and Institute Valencia D’Art Modern, Valencia, Spain (2001).

Tony Oursler is represented by Lehmann Maupin in New York.

RODNEY GRAHAM, born in 1947, Rodney Graham attended the University of British Columbia from 1968-71 and lives and works in his hometown of Vancouver. While Rodney Graham is commonly described as a conceptual artist, the scope of his artistic and intellectual pursuits defies categorization. As an artist, writer, musician, and actor he has made works that range across media and subject matter, inventing new approaches to landscape, literature, popular culture, music, and sound. His recent solo shows have included, 303 Gallery, New York (2004), “Rodney Graham: A Little Thought” Museum of Contemporary Art Los Angeles (2004), Donald Young Gallery, Chicago (2003), Hauser & Wirth, Zurich, Switzerland (2003), and Whitechapel Art Gallery, London, England (2002).

Rodney Graham is represented by 303 Gallery in New York.

McCarthy has recently participated in notable group exhibitions as well, including, “Sculpture and Form”, John Berggruen Gallery, San Francisco (2004), “I am the Walrus”, Cheim & Read, New York (2004), “Not Afraid”, Rubell Familly Collection, Miami (2003), and “Sitings: Installation Art 1969-2002”, The Museum of Contemporary Art Los Angeles (2002) among others. 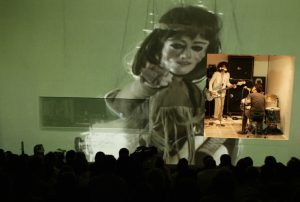 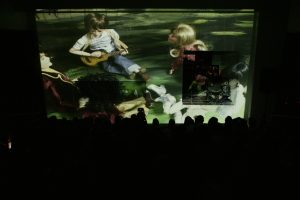 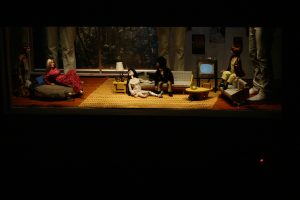 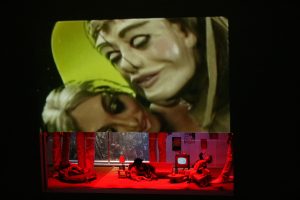 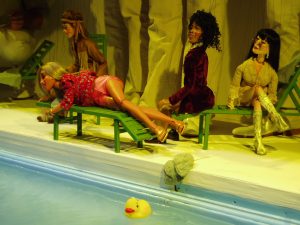 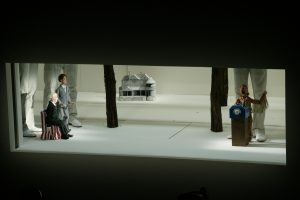 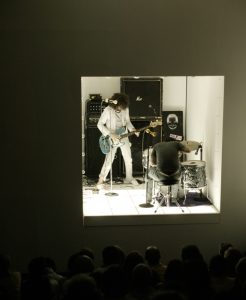