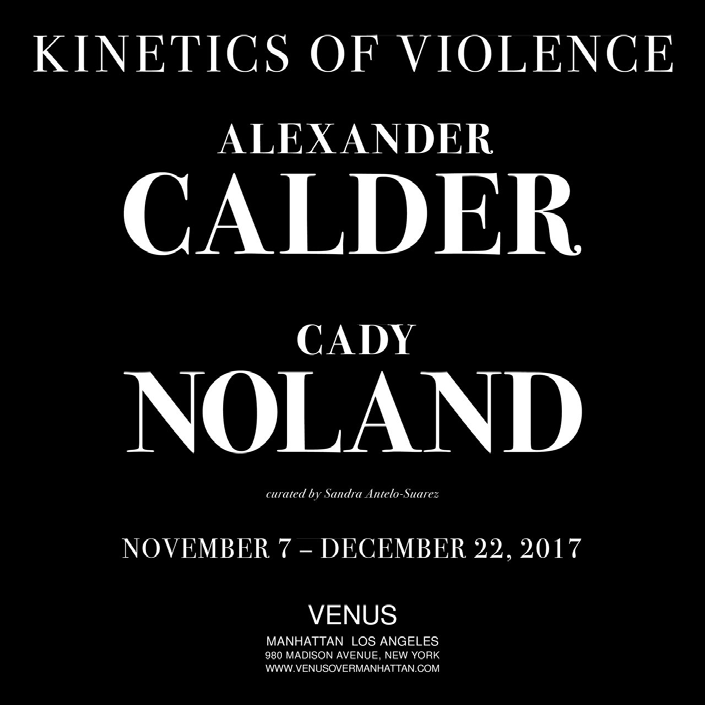 Kinetics of Violence enlists two radical yet divergent artists whose works confront issues of violence, either directly or indirectly, often through sculptures that employ literal or implied motion. Working over two decades apart, both Calder and Noland produced works amidst the violence of looming totalitarian regimes and brutal forms of social control that indict unchecked reserves of power, engaging in what curator Sandra Antelo-Suarez calls the “kinetics of violence.”

On view in the gallery is a rigorously focused presentation of four sculptures. Alexander Calder’s monumental standing mobile Rhombus (1972) – exhibited publicly here for the first time – is comprised of three massive black elements that constitute a base, from which a fourth element protrudes to support a massive red trapezoid, punctured at its center. The red mass spins when pushed, functioning like an updated guillotine that cuts through the gallery’s ceiling. Calder produced this work in France in 1972, the same year that he cosponsored a two-page spread in The New York Times to call for the impeachment of President Richard Nixon. Also on view

in the gallery is Constellation (1943), which Calder produced in Connecticut during World War II. Comprised of seven hand-carved wooden forms connected by lengths of wire, the work reflects Calder’s support of the war effort, working with wood in order to conserve metal. Though Calder’s works do not directly engage with politics, Antelo-Suarez proposes an analysis that accounts for Calder’s activism and suggests a penetration of the political into his work, foregrounding the violence of his sculptures and underlining their relationship to military materials and destructive machines.

Cady Noland, working nearly two decades after Calder’s death, is known for her practice that critiques networks of power that often result in violence. Two of her rarely exhibited works are on view in the gallery, both of which telegraph a criticism of American power through their references to punishment, restraint, and control. Corral Gates (1989) – exhibited in America here for the first time – is comprised of two barriers made of tubular steel, which swing open and closed, and function as a barricade between two sections of the gallery. The piece references the containment of livestock, but drives pointedly at the brutality of containment in the history of American culture, specifically the American West, signaled by a leather stirrup and equestrian bridles that hang over the gate. Beyond Corral Gates, one of Noland’s most important works, Gibbet (1993-1994), is installed alone in the gallery, exhibited here for only the second time since it was first shown at Paula Cooper Gallery in 1994. The sculpture is comprised of a stockade with five holes to secure a person’s ankles, wrists, and neck, as well as a small bench to support them. The work is made of wood, aluminum, and an American flag, draped over the stockade and punctured with five holes, one of which removes a star on the flag. Gibbet recalls the stockades used for punishment in early American colonial towns, which also functioned as public warnings to those that might break the law, or transgress established social codes. Gibbet also suggests one held up for public scorn, and draped with the American flag, Noland’s work puts America on trial, scrutinizing its moral calculus that is so often used to justify forms of violence.

Though Calder’s work is often understood to be politically innocuous, on occasion it was used explicitly for political ends. In 1937, Calder was commissioned by architects Josep Lluís Sert and Luis Lacasa to create a fountain for the Spanish Pavilion at the Exposition Internationale des Arts et Techniques dans la Vie Moderne, in Paris. “It was the intention of the Spanish government to make a feature in its exposition of the mercury mines of Almaden,” wrote Calder. Mercury Fountain was installed directly in front of Pablo Picasso’s Guernica, the artist’s monumental indictment of General Francisco Franco’s Fascist forces in the Spanish Civil War. Calder’s work flowed with mercury instead of water, in reference to and in support of the workers at Spain’s Almadén mercury mines, where workers fought Franco’s troops in the Spanish Civil War. During World War II, Calder attempted to join the American military as a camoufleur, intending to use his skills as an artist to contribute to the allied war effort. In the postwar period, Calder became a staunch critic of American foreign policy in the Cold War, cosigning an open letter in The New York Times headlined “America Needs a New Foreign Policy,” even as the United States continued to install his large-scale sculptures at its embassies around the world. In 1951, Calder’s apparently “communisitic” political sympathies were discussed in the United States Congress, and the McCarthy-era House Un-American Activities Committee (HUAC) monitored the artist thereafter. His political commitments grew stronger during the Vietnam War: Calder joined the National Committee for a Sane Nuclear Policy as the chairman of Artists for SANE, attended numerous marches against the war in Washington, and produced posters for a host of anti-war groups. In 1966, Calder and his wife Louisa placed a full page anti-war advertisement in The New York Times calling for “A New Year, New World,” and in 1972, the Calders cosponsored a two-page spread in the Times calling for the impeachment of President Nixon. In perhaps his greatest act of dissidence, Calder refused President Ford’s attempt to award him the Presidential Medal of Freedom, on the grounds that he could not accept an award while conscientious objectors and deserters were denied amnesty. Even when President Ford tried to posthumously award Calder the medal, Louisa Calder declined to attend the ceremony.

Curator Sandra Antelo-Suarez states: “Symphonic silences, explosions and collisions reverberate throughout the triangle formed in this exhibition by Calder’s Rhombus and Constellation, and Noland’s Corral Gates, and Gibbet. Together the works indict our current scenario of ethical paralysis for its tyrannical confrontation and crises, yet which so many refused to see at the time.”

ABOUT VENUS
Founded in 2012 by Adam Lindemann and with spaces in Manhattan and Los Angeles, VENUS is dedicated to curated exhibitions both historic and contemporary, which cast a unique and often iconoclastic view on the work of established artists, or artists whose works have been somewhat overlooked. The gallery continues to collaborate with prominent artists, foundations, estates, and galleries.

For further information about the exhibition and availability, please contact the gallery at

ALEXANDER CALDER, (born July 22, 1898, Lawnton, Pennsylvania, U.S.—died November 11, 1976, New York, New York), American artist best known for his innovation of the mobile suspended sheet metal and wire assemblies that are activated in space by air currents. Visually fascinating and emotionally engaging, those sculptures—along with his monumental outdoor bolted sheet metal stabiles, which only imply movement—make Calder one of the most-recognizable and beloved modern artists. He also made a smaller number of sculptures in the more-traditional materials of wood and bronze and did paintings, mostly in gouache, as well as drawings, including illustrations for books, and prints, and was an inventive designer of jewelry.

CANDY NOLAND was born in 1956 in Washington, D.C., and earned a BA from Sarah Lawrence College, Bronxville, New York. She lives and works in New York City. Noland emerged in the late 1980s and early 1990s as a force in contemporary art with her gritty critiques of America’s material and ideological culture. Before showing with Paula Cooper Gallery, New York, her work was part of Colin De Land’s legendary American Fine Arts Gallery. Noland’s work has been exhibited in the Whitney Biennial and Documenta 9. Solo exhibitions have been organized by Paula Cooper Gallery; Museum Boijmans Van Beuningen, Rotterdam; and the Wadsworth Atheneum, Hartford. There are five Noland works in the Broad collections. Noland works have been loaned to five venues, including the Fogg Museum, Harvard University, Cambridge, and the New Museum of Contemporary Art, New York.

HYPERALLERGIC
The Violent Forms of Alexander Calder And Cady Noland
The dialogue among four works — two by each artist — ​suggests​ a dissonant string quartet​ ​as each ​piece asserts its distinctive timbre and range.
By James Gibbons
December 16, 2017
https://hyperallergic.com/417266/kinetics-of-violence-alexander-calder-and-cady-noland-venus-over-manhattan-2017/

THE BROOKLING RAIL
ArtSeen
Inside and Outside:
Cady Noland and the Violence of the Everyday
By Andreas Petrossiants
https://brooklynrail.org/2018/02/artseen/Inside-and-Outside-Cady-Noland-and-the-Violence-of-the-Everyday

Savona Bailey
Kinetics of Violence
Exhibition review by contributor Mitchel Cohen on the Alexander Calder and Cady Noland at the Venus Over Manhattan Gallery on the Upper East Side.