Inicio Smile Without A Cat: A Celebration of Annlee’s Vanishing. A fireworks project by Pierre Huyghe and Philippe Parreno 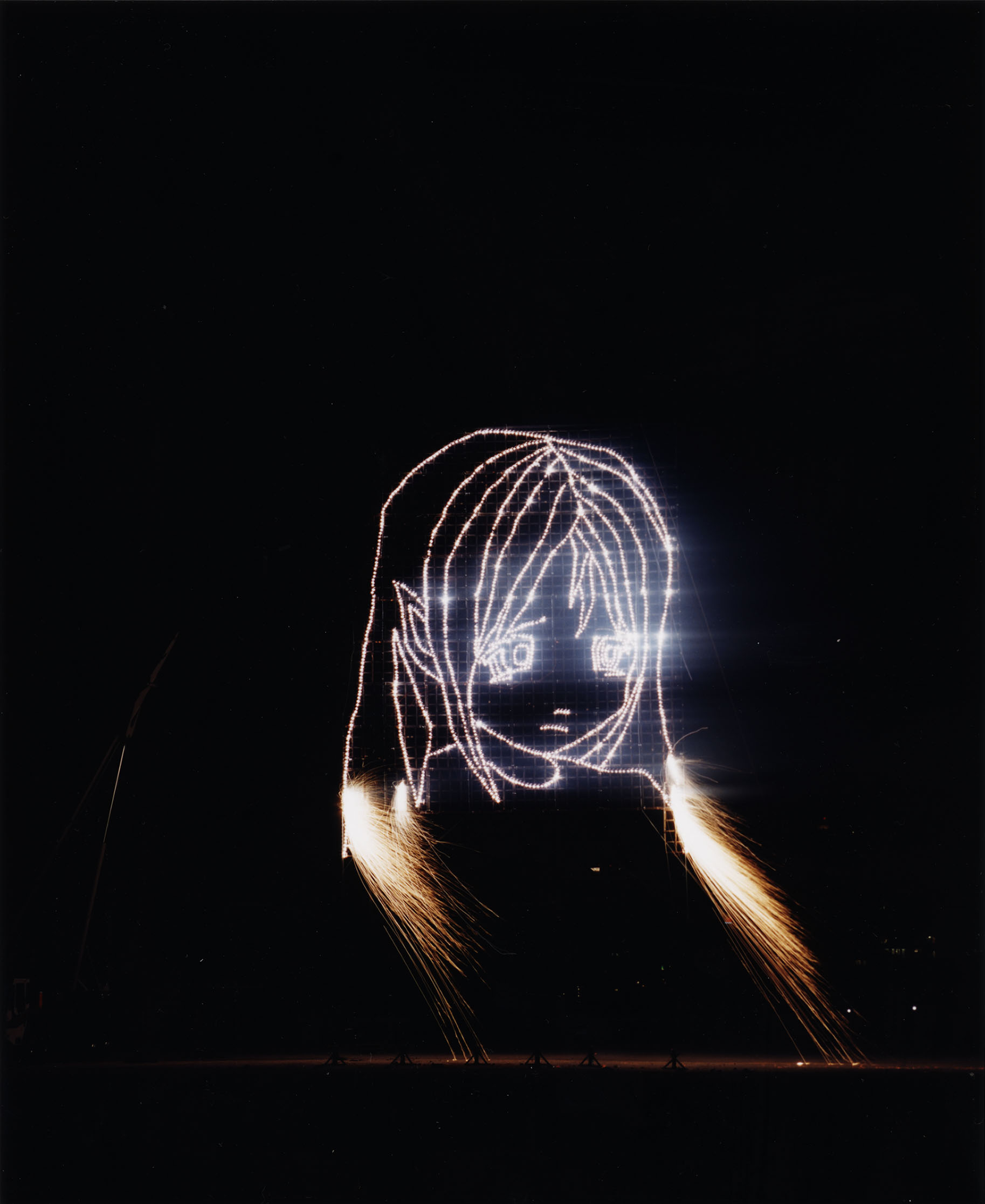 Smile Without A Cat: A Celebration of Annlee’s Vanishing. A fireworks project by Pierre Huyghe and Philippe Parreno

TRANS> invites you to the celebration of Annlee’s vanishing during the inaugural night of Art Basel Miami Beach on December 4, 2002 at 9:30 pm. This will be her last manifestation as her silhouette sparkles and dissipates in a series of fireworks over the skies of Miami Beach as she is finally disappearing from the kingdom of representation. This is a party, the last blinking.

TRANS> editions is releasing a film and photographs of this last artwork with Annlee, A Smile Without A Cat (Celebration of Annlee’s Vanishing), in 2003.

About  Annlee
Several years ago the internationally renowned artists Pierre Huyghe and Philippe Parreno purchased the copyright to an unused Japanese anime character named Annlee from a design agency that produces and sells computer files for cartoon characters.  They began bringing her to life in a series of computer animations and other artworks that are collectively known as No Ghost Just A Shell.  In addition, Huyghe and Parreno have also invited other artists to “adopt” what is essentially an orphaned image and create stories and scenarios with the aim of further multiplying the range and reach of her character.
Prior to being bought, Annlee was an image/identity without a future, designed to join any kind of story, but with no chance of permanently inhabiting any of them. With the Annlee project notions of authorship, copyright, and representation are blurred in the interrelations and disconnections created between all the individual artists who took her on. Through these collaborative artworks and projects the image of Annlee has “entered” numerous museums such as the San Francisco Museum of Modern Art inaugurating on December 13th, 2002, the Musée d’Art Moderne de la Ville de Paris, the Kunsthalle in Zürich, and the Institute of Visual Culture in Cambridge, Massachusetts, as well as international exhibitions such as the Venice Biennale.

About TRANS>
TRANS> is a tax-deductible not-for-profit organization based in New York City and São Paulo. It has a publishing division, an exhibition space in Chelsea, and curates exhibitions in public spaces throughout the world. Since it was first published in November 1995, TRANS> has been lauded by the press. TRANS> was described in the New York Times as “…a serious critical journal featuring work by distinguished critics.” Art Documentation, the publication of the Art Libraries Societies of North America, stated that: “The writing reflects sound scholarship, and an examination of the short biographies of contributors and staff cited in each issue provides evidence of the diversity embraced by the editorial policy.” We have also won the American Design Award, have been selected by the Library Journal as one of the Best Magazines, and have been given the prestigious George Wittenborn Award in acknowledgment of the breadth and quality of our articles.

About Art Basel Miami Beach
Art Basel is the most important international fair for contemporary art, drawing more than 50,000 art lovers, collectors and professional visitors, and over 1,500 representatives of the media from all parts of the world to view presentations by more than 200 leading international galleries. This December, Art Basel will launch their eagerly awaited debut on the American continent.

Howard & Sons
A world leader in the field of pyrotechnics, Howard & Sons is a well-established, globally renowned company responsible for some of the world’s most spectacular fireworks displays. Howard & Sons has been supplying Disneyland and Disney World in the USA, the largest daily users of fireworks in the world, for 27 years and has helped developed the pyrotechnic technique that is only used by Disney Enterprises: air launch, chip inside the aerial shells and the debris-less fireworks.

PIERRE HUYGHE. Born in 1962 in Paris, where he currently lives and works. In 2000 he was a DAAD Artist in Residence in Berlin.