TransMag
Inicio DTAOT: Combine (Don’t Trust Anyone Over Thirty, All Over Again) at the Whitney Biennial

DTAOT: Combine (Don’t Trust Anyone Over Thirty, All Over Again) at the Whitney Biennial

Combine is a fusion of documentation and new video by Tony Oursler, special effects, text, sound and drawings by the artists. It is does not follow the linear nature of the puppet show but presents a new vision designed for a video viewing situation. This installation is designed to use two overlapping Hi Definition projectors to form a collage of images that extend the world of DTAOT.

Hi Definition is technology and production is provided by Voom.

TRANS> is a 501 c non profit which commissions artworks by contemporary artists and publishes TRANS>, a contemporary cultural journal.

VOOM is the world’s first 24-hour channel devoted to experimentation and video art. The core of the channel is an outreach program that provides production support, including high-definition cameras and edit suites, to artists, directors and other creative talents. The intensely collaborative environment and total creative freedom offered by LAB has already directed some of the top artistic talent in the world. Participants include Robert Wilson, Zhang Huan, Winona Ryder, Brad Pitt, Robert Downey, Jr., Marianne Faithfull, Mikhail Baryshnikov, and Juliette Binoche. During the course of 2005, LAB will announce partnerships with several major institutions that encompass the worlds of art, design, television, and academia. LAB launched in 2004 and is available in HDTV on the Voom direct broadcast satellite system.

The 2006 Whitney Biennial, the nation’s signature survey of contemporary American art, will be organized by Chrissie Iles, curator, Whitney Museum of American Art, and Philippe Vergne, chief curator of visual arts at the Walker Art Center in Minneapolis, Minnesota. Iles and Vergne will spend the rest of the year seeking out the most significant artists working today. The list of selected artists is announced toward the end of 2005. The seventy-third in the series of Annual and Biennial exhibitions inaugurated in 1932 by Gertrude Vanderbilt Whitney, the 2006 Biennial will be on view from March through May 2006.

In naming the curators, Adam D. Weinberg, the Whitney’s Alice Pratt Brown Director, said, “Each Whitney Biennial is an historic event we anticipate greatly, and each is completely different from the past. Chrissie and Philippe are experienced, passionate, and deeply committed. Both are thoroughly familiar with the contemporary American scene, and their partnership will also bring a broad international perspective to the project as well as enormous insight, energy, and flair. It will be a provocative and powerful show of the best new work by emerging and established artists.”

ABOUT THE COMMISIONER AND PRODUCER

TRANS> is a not-for-profit arts and cultural organization founded by Sandra Antelo-Suarez. Based in New York City, TRANS>attempts to locate itself in a transitional space and chooses arts and cultures as its subjects because it understands them as the real trans-objects of contemporary life. TRANS> is a flexible tool to design new cartographies, to subvert rigid codes, and to encourage unexpected dialogues. TRANS> believes in a tradition of multiple views and constant change.  It responds to the immediate creative needs and urgencies of the times.

TRANS> has a publishing division, an exhibition space in Chelsea, and produces exhibitions in public spaces throughout the world.

In addition to offering first solo exhibitions to artists in New York in its humble exhibition space in Chelsea, TRANS> also commissions and curates offsite projects. Its recently commissioned project, currently in tour, Don’t Trust Anyone Over Thirty: Entertainment by Dan Graham and Tony Oursler with Rodney Graham, is a 50-minute rock opera puppet concert. In 2002, TRANS> commissioned A Smile Without a Cat, a fireworks project by Pierre Huyghe and Phippe Parreno at the inaugural night of Art Basel Miami Beach. Other offsite projects include Utopia Shelters by Anri Sala and Edi Rama and En el Cielo, an exhibition over the skies of Venice, both project at the Venice Biennial (2003 and 2001 respectively).

In all of these projects, TRANS> considers contemporary art production and culture from a pluralistic perspective and strives to create a venue for multicultural artistic exchange and experimentation. All of the TRANS> publications are multilingual (with writers published in their original language and translated either into English, Spanish, or Portuguese, the primary languages of TRANS>).

Dan Graham’s cultural involvement began in the 1960s as a rock critic. An innovative first-generation conceptual artist whose work has been exhibited in major art institutions around the world, Graham has broken significant ground as a theoretician and writer by introducing rock music into the discourse of art, criticism, and cultural theory, culminating in the 1992 publication, Rock My Religion, a book of essays edited by Bruce Wallis dealing with these themes. He has won numerous awards, including The French Vermeil Award (2001), The Skowhegan Medal for Mixed Media (1992), and the Coutts Contemporary Art Foundation Award (1992). His work is included in important collections domestically and abroad, and he has had recent solo shows at Contemporary Art Gallery, Vancouver, Canada (2003), Chiba City Museum of Art, Chiba, Japan (2003), Kitayushu Municipal Museum of Art, Fukuoka, Japan (2003), Marian Goodman Gallery, New York (2002), and Museo Serralves, Porto, Portugal (2001). Graham’s work has also been presented in such notable group shows as the Los Angeles County Museum of Art, Los Angeles (2004), Fundacio Joan Miro, Barcelona, Spain (2004), and the Venice Biennial, Italy (2004), among others.

Born in Urbana, Illinois in 1942, Dan Graham now lives and works in New York, where he is represented by Marian Goodman Gallery, as he is in Paris.

Phillip Huber, master puppeteer for Don’t Trust Anyone Over Thirty, is an internationally recognized “artist with marionettes,” who is most widely known for his screen work as the marionette-animator played by John Cusack in the thrice nominated Academy Award film, Being John Malkovich. Huber’s stage credits include Busker Alley, starring Tommy Tune, It’s Magic, starring Harry Anderson, That’s Christmas, starring Sandy Duncan, Christmas with Friends and Nabors, starring Jim Nabors, and The Road to Hollywood, with Tony Award-winning director Walter Bobby. Television appearances include The Tonight Show with Jay Leno, Le Plus Grande Cabaret du Monde for French TV, Showbiz Today for CNN and numerous commercials, the most recent being Move Free for Weider Nutrition. Huber’s nightclub per- formances include the Lido in Paris, Casino de Monte Carlo in Monaco (including a Royal Command Performance for Prince Rainier), The Magic Castle in Hollywood, Rainbow & Stars in New York, as well as performances on first-class cruise ships around the world.

Bruce Odland is a Sound Artist and Composer internationally known for his installations transforming city noise into harmonic music thus altering the emotional landscape of public space. His sound scores for Peter Sellars, JoAnne Akalaitis, and Andre Gregory have been heard in theatres throughout US and Europe. He also works extensively in film, radio, and museum exhibition. His “Sounds from the Vaults” for Field Museum won the Golden Muse award for interactivity. Currently he is working on an opera with Wooster Group.

Tony Oursler was born in New York City in 1957. He graduated from the California Institute for the Arts with a BFA in 1979 and returned to New York, where he has continued to live and work. Oursler has specialized in installation, painting, sculpture, and video since the late1970s. His recent mixed media installations—in which theatrical objects such as puppets and dolls are layered with video projections and spoken text—are prefigured in the wildly inventive body of videotapes that he has produced over the past twenty years. Like Graham, Oursler’s work has also considered the role of music in society; he has done projects with Sonic Youth as well as other music icons. His recent solo exhibitions include, Metropolitan Museum of Art, New York (2005), Jeu de Paume, Paris (2005), Musee D’Orsay, Paris (2004), Gallery Paule Anglim, San Francisco (2003), Lisson Gallery, London, England (2003), Parallel Lines Studio d’Arte Raffaelli, Trento, Italy (2002), Magasin 3, Stolkholm Kunsthall, Sweden (2002), Tony Oursler Drawings, Lehmann Maupin, New York (2001), Metro Pictures, New York (2001), and Institute Valencia D’Art Modern, Valencia, Spain (2001).Tony Oursler is represented by Metro Pictures and Lehmann Maupin in New York.

Carlos Soto works in a variety of fields, encompassing performance, theory, fashion, and dramaturgy. He has worked closely with directors Robert Wilson, Richard Foreman, and Kameron Steele, among others.

Joshua Thorson is a filmmaker and artist who lives in New York. His work has been shown at MoMA, the Metropolitan Museum of Art and the Rotterdam International Film Festival, among others. He is currently developing a script for his next video, a feature, and completing several new paintings on plexiglass.

Eugene Tsai lives and works in New York as an art director and designer. He has collaborated with artists including Gaetano Pesce, Robert Wilson, and Urs Fisher. His furniture and fashion designs have been exhibited in the US, Europe and Japan. He is currently preparing for the ongoing project – “Video Portraits” with Robert Wilson and continuously thinking about ’little things’ for Don’t Trust Anyone Over Thirty. 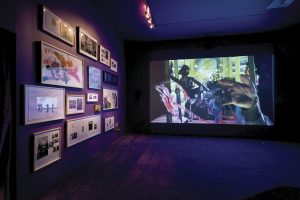 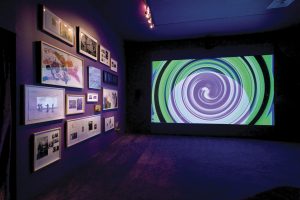 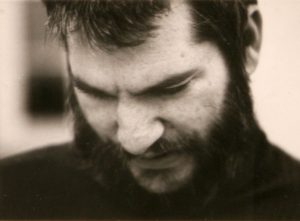