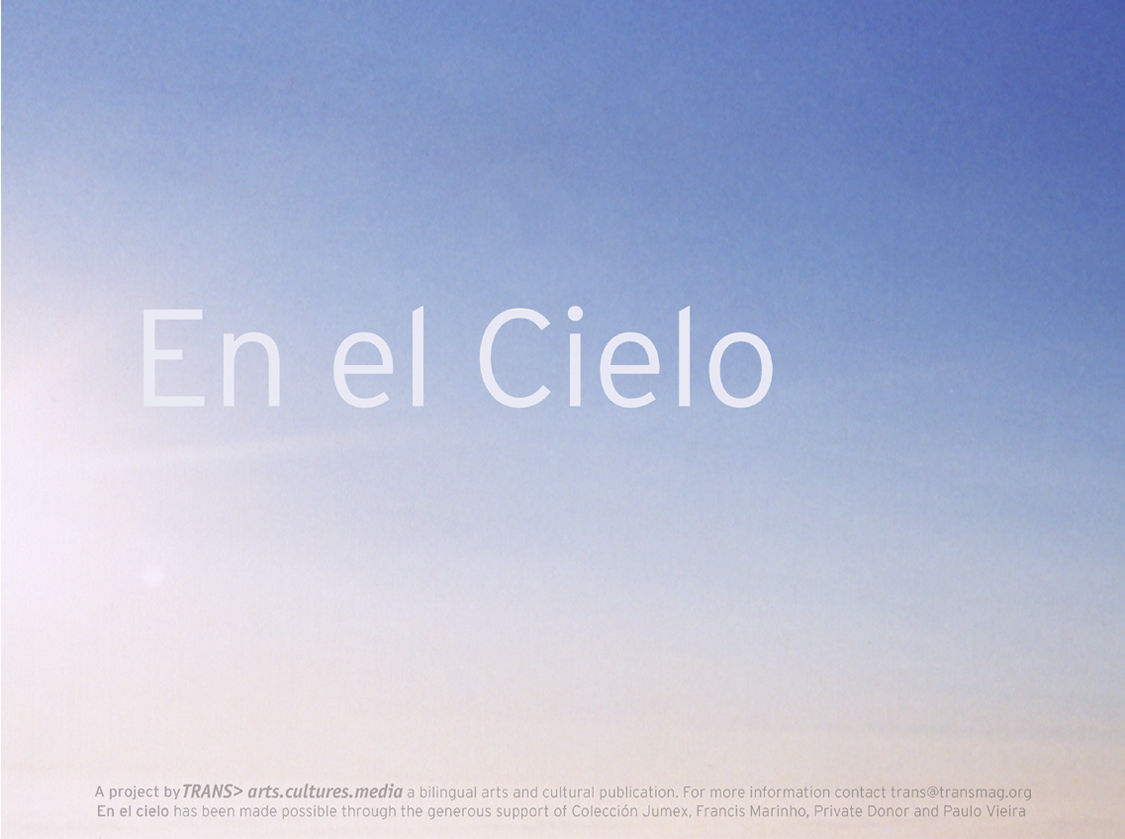 TRANS> arts.cultures.media is pleased to present:

Continuing the exploration of possibilities of the publication medium and exhibition sites, “En el Cielo” – an ephemeral exhibition/publication that will print artists’ projects onto the skies over Venice. Eleven artists whose works blur boundaries of art and life are participating in “En el Cielo.”

Artist collaborating with TRANS> made drawings or selected words that will be redrawn or written in the sky by a team of renowned skywriters. These events will take place at Magic Hour each evening of the five opening days of the Venice Biennale. From June 6th to the 10th, for approximately ten to twenty minutes, depending on weather conditions, they will be on view before they disappear into the night sky. “En el Cielo” will be documented in a portfolio containing a photograph of each artwork.

“En el Cielo” is a project of TRANS> arts.cultures.media. This project is generously sponsored by Colección Jumex, Private Donor, and Paulo W.A.Vieira.

Passim, inc., publisher of TRANS> arts.cultures.media, is a 501(c) 3 not-for-profit organization. TRANS> editions are tax deductible to 60% of their value.

TRANS> arts.cultures.media is supported by grants from the RockefellerFoundation, The Andy Warhol Foundation, NEA, Conaculta, and La Colección Jumex as well as all of the Friends of TRANS>. Patrons of TRANS> are: Bohen Foundation, Eugenio Lopez, Rosa and Carlos de la Cruz, and Milú Villela.

For further information please contact us at: 646.486.0252; e-mail: trans@transmag.org http://www.transmag.org

OLAFUR ELIASSON Icelandic artist, born in 1967 in Copenhagen, Denmark.  He currently lives in Berlin, Germany, and works around the world.  He has had numerous international exhibitions including Funcionamiento silencioso, Museo Nacional Centro de Arte Reina Sofia, Madrid; Olafur Eliasson, Kunstbau Lenbachhaus, Munich; Yet Untitled, i8 Galleri, Reykjavik; Olafur Eliasson: Every morning, I feel different, Musee d’Art Moderne de la Ville de Paris, Paris; Seeing yourself Sensing, The Museum of Modern Art, New York; Your only real thing is time, The Institute of Contemporary Art, Boston; Surroundings surrounded, ZKM Center for Arts and Media, Karlsruhe; and The mediated motion, Kunsthaus Bregenz, Austria.  Eliasson will also be the fourth participant in the Unilever Series of commissions for the Turbine Hall at the Tate Modern.

Eliasson works as both a photographer and installation artist, creating work that gives a visual experience to geographical and natural phenomena.  He uses natural material such as moss, grass, and trees in conjunction with immaterial elements—air, light, water, wind and fog, turning a science experiment into an aesthetic one; from an artificial rainbow to a dramatically lit waterfall.  James Rondeau writes, “Produced with a combination of organic and synthetic materials, his art exists in a indeterminate border space between magic and artifice, romantic aspiration and artless imitation.”

Spanning several mediums, Ligon’s work discusses race, sexuality, identity, language, representation, colonization, the political and the personal.  His works comprised of stenciled black text appropriated from writers such as Ralph Ellison;  the quoted phrases become illegible in their repetition.  During his residency at the Walker Art Center, Ligon exhibited reproduced images from black-themed 70s coloring books as large-scale silkscreens on canvas.  The bright splashes of color on them, like Malcom X’s red clown cheeks, were inspired by a coloring project Ligon did with school children in St. Paul.

JANET CARDIFF AND GEORGE BURES MILLER have worked collectively and individually for many years.  Cardiff was born in 1957 in Wingham, Canada.  Known for her “audio walks”, she has shown her works  in numerous group exhibitions and solo exhibitions such as The Paradise Institute, Plug In ICA, Winnipeg; Janet Cardiff: A Survey of Works Including Collaboration with George Bures Miller, Astrup Fearnley Foundation, Oslo; Forty-Part Motet, Contemporary Arts Center, Cincinnati; and Janet Cardiff: A Survey of Works, Including Collaborations with George Bures Miller, PS1 Contemporary Art Center, New York.  George Bures Miller was born in 1960 in Vegreville, Canada.  He is known for his kinetic sculptures and video installations.  He has shown at the Argos Gallery, Brussels, Belgium; and Mercer Union, Toronto, Canada.  The pair has shown together in many exhibitions including the 2001 Venice Biennale, Venic; Kunsthalle Portikus, Frankfurt am Main; Janet Cardiff and George Bures Miller, The Berlin Files, KulturStiftung der Deutschen Bank, Frankfurt; Voices, Witte de With, Rotterdam; Fundacio Joan Miro, Barcelona; The 6th International Istanbul Biennale, Turkey; and The Tate Modern Opening, London.

Jeong-a uses everyday materials in her installations such as aspirin, pencils, garbage, and coins.  However, the banality of these objects is left behind as Jeong-a’s installations form dream-like and poetic structures.  Correlating Jeong-a’s Oslo, 1998, with Gianlorenzo Bernini’s The Ecstasy of Saint Teresa, 1647-52, Francesco Bonami writes, “Koo Jeong-a treated aspirin like small pieces of marble, but instead of searching for a form within a huge bock of stone in the manner of the Baroque sculpture, she extracted the spirit of the matter—its evocative power—to discover the ecstasy inherent in everything of the physical world. “

Dave Muller’s work explores many different amorphous boundaries such as that between artist and curator, and high art and commercial advertising.  Among a myriad of projects, he produces “Three-Day Weekends”, which he describes as “an artist-run nomadic project”, as well as watercolor, pencil and ink drawings based on actual exhibition announcements.  Filled with wry humor, these hand-made posters and art magazine covers advertising other artists’ work are a witty investigation of the contemporary art scene and its promotional systems.

Muniz began his artistic career as a sculptor, moving on he made photographic reproductions of his sculptures and eventually turned most of his focus towards photography, or more accurately, towards work with photography as the final product.  As a conceptual photographer he works with a variety of objects and materials like toilet paper, dust swept up from the Whitney’s floors, chocolate, syrup and wire.  His pictures of clouds from cotton, earth from ashes, Freud from chocolate, and Medusa’s head from spaghetti, rattle our comfortable notions of visual reality, exposing its fallacies and contradictions.

Orozco’s work constantly redefines the meaning of objects in space; this change in context heightens his pieces’ humor, socio-political consciousness and formal elements.

Tiravanija is constantly delineating the border between art and life serving Thai curry to gallery visitors at one exhibition while installing a reconstruction of Rudolf Schindler’s house, then used as a stage for various activities, in another exhibition.  By demanding social interaction at his exhibitions, Tiravanija exposes and revises comfortable notions  of viewer/participant and public/private, creating an unexpected social experience with infinite possibilities.

Wall has worked in photography for 27 years, known for his large-scale black and white photos as well as his large format photographic transparencies mounted on light boxes.  His work looks at various themes—commenting on contemporary social and political realities as well as the unacknowledged mundane scenes of life.  On Jeff Wall’s work Robert Enright writes, “Although the scale of his works is often dramatic, size is not the source of their power.  It has more to do with a complex matrix of recognition and surprise, of art history and current invention, of the theatricality and social commentary, as well as flawless visual organization.  Here [in Walls’ larger pictures], scale has to do with the uncanny relationship between idea and image, between thinking and seeing, that is at the center of his achievement.”

Claudine Ise describes VALIE EXPORT’s image a photograph of the artist as a “new breed of feminist revolutionary.”  Ise continues writing, “EXPORT’s performances and actions form the beating heart of her oeuvre.

Although initially trained as a painter, he began experimenting with film in 1967 and produced a large number of photographs through the late 1960s and early 1970s. His work often holds up a mirror to a range of taboos ignored by American popular culture through the use of the body as a repository of society’s fears, obsessions, and conflicts. McCarthy engages in the social critique through outrageous theatricality and a violent landscape of dysfunction and trauma.